So Roy is the first miniature from Wave 2 which I decided to paint. Such a lovely sculpt and a lot of fun while painting.

Here is a step-by-step for how I tried to make Roy come to life: 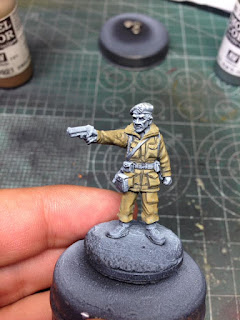 Same stage as previous picture. Nothing has to be perfect at this point. Just a general placement of light and shadow: 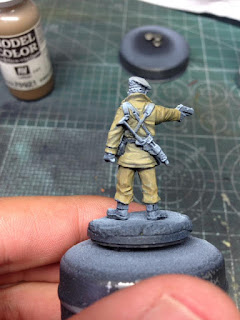 2) Starting on the camo, I used Reflective Green (MC890) and Bronze Green (MC897) for painting the green patches: 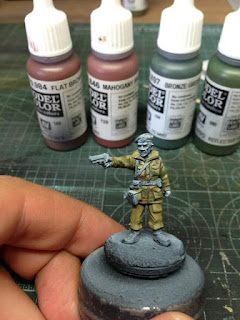 Painted them first with heavily thinned paint putting many small streaks next to each other. Then went on to less dilution to carefully intensify the patches with more, veeery thin lines: 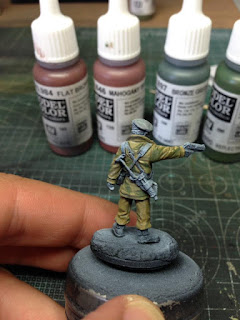 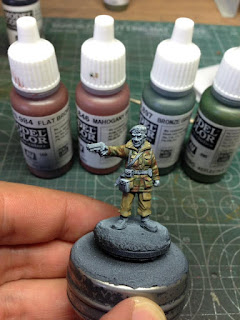 4) Created a very thin mix of the browns and greens used so far and added a tiny bit of black. Using this to intensify shadows overall on the jacket: 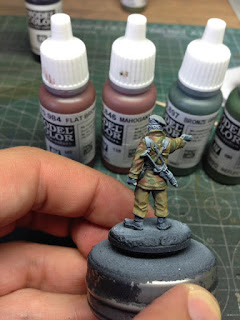 5) Painted more lights with Buff (MC976) and more shadows with dark brownish tones. Also started mixing in Yellow Ink and glazed over light and mid-tone areas with a yellowish-brownish-light tone. Doing this only in some areas in order to make the whole camo look more interesting with a few warm-colored parts now. Using Blue Ink and previous dark brown tones, I am doing the same for some of the shadow areas: 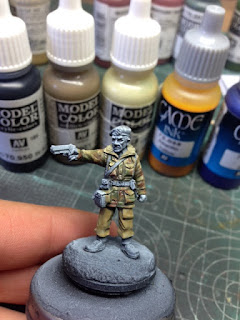 Same status as previous pic... To get to this stage, I went back and forth between intensifying lights and shadows with thinned down paints, glazing over mid-tones where I think it's a good idea and glazing in warm and cold tones to increase contrast a little: 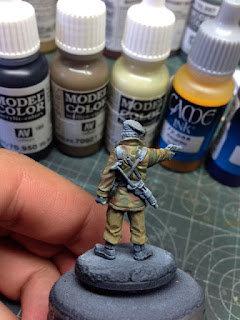 6) With Flat Brown, Mahagoni Brown, English Uniform and Buff I alread have everything on my palette that I need to get the face started. I mixed the above colors together, so that I had a nice reddish dark brown. I thinned this down quite a bit and put on two layers into all shadow and mid-tone areas. Then I mixed a very light color with Buff and Flat Brown and blocked in the lights on forehead, nose, cheekbones, etc.: 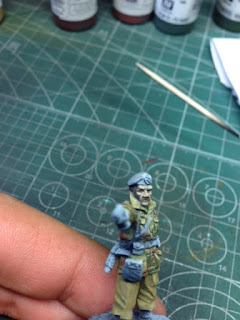 7) Well, after the last picture I kind of got lost while painting and forgot to take more pictures of the face painting process. :( As you can see, some magic happened along the way. ;) I used Flat Brown, Mahagony Brown, Buff and White to paint the general lights and shadows of the face. Then I used Yellow, Red and Blue Ink to add different tones to the face. Usually I go back and forth a bit between building out lights and shadows, glazing some areas with different colors and then going adding mid-tones and lights, etc....: 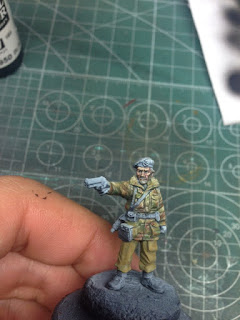 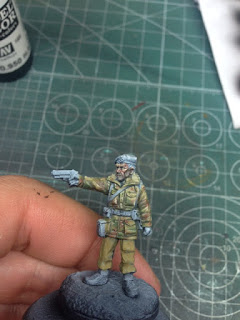 8) Painted the beret with Red (MC947), Dark Red, (MC946), Flat Brown (MC984) and Black. I also blocked in the dark-grey base color for his hair. I love this moment when you paint a miniature and the face starts popping out really nicely as you put on color in the areas around it. :) 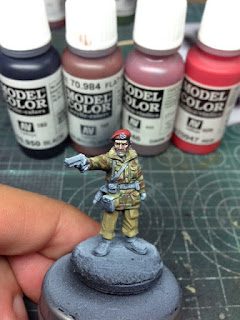 9) To paint the insignia on the beret, I painted the whole insignia black. Following a simple method for painting golden insignia from Ruben Torregrosa, I chose Golden Brown (MC877) as a base color. For lights I simply added white and for the shadows I used Flat Brown (MC984): 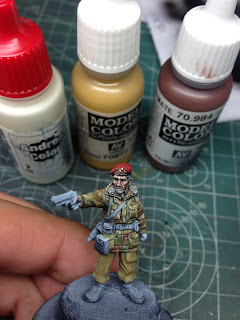 10) Next, I moved on to working on the trousers. I started by intensifying the shadow areas with English Uniform. I also started mixing Blue Ink in to get darker shadows in a cold tone. I then started building out the lights using Green Ochre (MC914) mixed with white. Pure Green Ochre to help balance out the mid-tones. I also painted a few semi-transparent layers of red in some of the mid-tone and light areas. This did a few tricks at the same time: It introduced yet another color tone to break monotony AND it contrasts really nicely with the cold shadows that I painted previously: 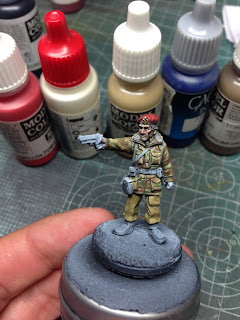 11) Painted the anklets with Green Grey (MC886), Iraqui Sand (MC819) and Dark Sand (MC847) (in that order working towards lighter areas). Then used English Uniform (MC921) for shadows.
For the boots, I simply thinned down black very heavily and before the thin mix can dry on the miniature, I swipe the boot caps with my finger. Then I do a few more passes with the thin black paint, but only on the sides and at the back. In the lighter front part of each boot, I place a few irregular small dots in a light color (whatever is on the palette at that point).
I have to admit that I absolutely hate painting feet. No one ever looks at feet... well, maybe some people do, but that is not the point. The point is that I just hate painting feet! :) 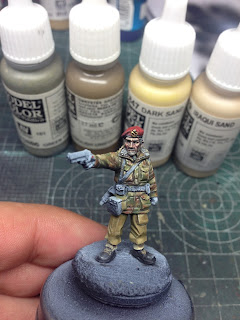 12) Painted the webbing incl. some of the small bags, etc. with a base of Green Grey (MC886). Applied a controlled wash with Russian Green (MC894) and then built up mid-tones and highlights with Green Grey and another very light pastel green color (MC971): 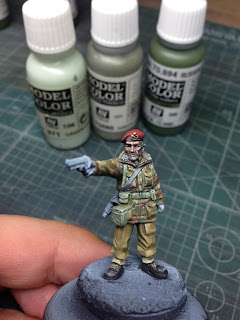 13) Blocked out the pistol and Sten gun with black and painted the leather strap of the sten with German Camo Black Brown (MC822). Painted highlights with the same pastel green color that I used for the webbing highlights (MC971), added in highlight dots and tiny scratches with Bone White. Finally used Blue Ink and the brown base color in a mix and well diluted to glaze in shadows where I wanted the strap to look darker: 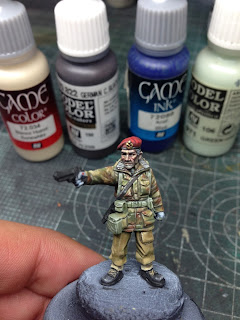 14) Painted the Pistol and the Sten Gun with Black and Bonewhite first. Starting from a dark grey - almost black base - and building up highlight by mixing more and more Bonewhite into the mix. Finally added Silver Metallic dots and lines in some places. Also used Black with random Greens and Browns mixed in (whatever is on the palette) to do darklining on the whole miniature: 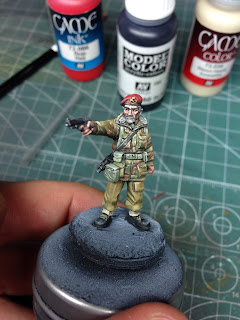 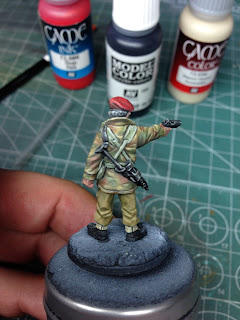 15) For the base, I mixed together some of the brown, green and yellow tones that I still had on my palette and created a base where I blended all of them wet-in-wet. Next, I dry-brushed with Bonewhite and a bit of Golden Brown. Once that was all dry, I used thinned-down wood glue on parts of the base and sprinkled on my "homegrown" grass-and-stuff mix (contains different sizes and colors of grass, flock and old tobacco). After that, I also glued on a couple of grass tufts from MiniNatur. Finally, I applied a few washes with very thinned down browns and greens and finished it up by putting on some brown dry pigments, which I rubbed into some parts of the base and over the boots: 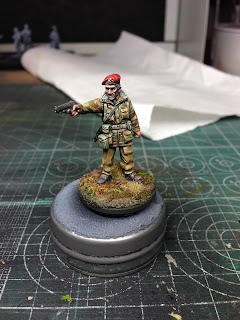 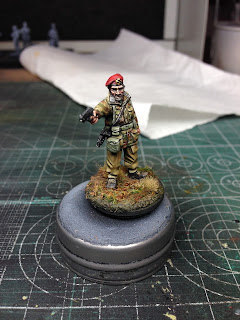 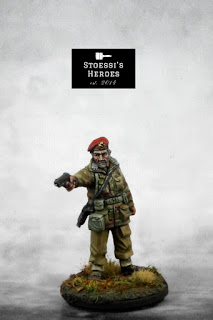 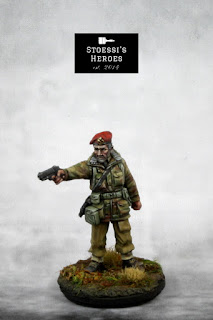 If you have questions or comments, fire away.

If you want to get a copy of Roy, check out the Stoessi's Heroes Reseller page or stop by our online store.


You want to be one of the first to see new releases from Stoessi's Heroes? Join our Facebook Group for sneak peeks!